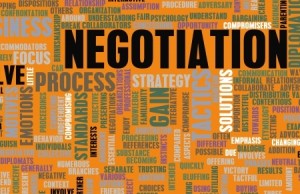 You got your foot in the door of that executive level position you were eyeing, you nailed the interview, and you’ve been told that you’re at the top of the list of qualifying candidates. Congrats!

Then, the interviewer asks that dreaded question, “What kind of compensation are you looking for?”

Most job hunters tend to freeze up here, but for execs it can be particularly frightening. Big positions tend to equal big money – money a company is shelling out – so the stakes are higher for candidates seeking this kind of position. Below you’ll find some tips on negotiating an executive level salary in addition to how to answer the above question.

Believe you’re worth the big bucks.

This may seem trite, but it’s one of the biggest issues people face when negotiating. If you want the big bucks you need to believe you deserve them.

You can’t let yourself get bogged down by stories of the economy, what the interviewer might think of you, what other candidates have said, or where the company may stand financially. The reality is that you don’t know how much money the company has or what the interviewer is thinking. You also don’t need to worry about what other candidates have said – the important thing to remember is why you’re the right fit for the job and why that merits the money.

Keep in mind that this is much different than being entitled. Entitlement is coming from a place of control where as believing you can get more money is just a healthy dose of self-esteem.

Most people will low-ball themselves at the first opportunity. They think they are being humble when in reality they could have made more money. Combat this by taking the minimum salary you’ll accept and aiming higher.

The worst that could happen is they tell you it’s not possible, at which point you begin negotiating. If this does happen then at least you know it probably won’t go any lower than your minimum requirement.

With that being said, there does need to be a certain level of reality when talking about salaries. There’s a big difference between asking for a 10% increase and asking for some extra zeros.

Back up your salary number with evidence.

Companies will pay good money for great candidates, therefore it’s your job to show them that they need you on their team.

This starts even before they ask you about the salary by making sure to show your leadership qualities on your resume and during the interview.

You can really knock their socks off by using quantitative examples. Tell them how you increased company revenue, brought down costs, blew sales numbers out of the water, or made employees more productive. The more proof you have to back it up, such as reports or performance reviews, the better your chances of getting the salary you want.

By providing hard evidence you also take care of any worries the interviewer may have had of you overreaching or sounding conceited.